Bill Easter has never been one to spend his weekends on the couch. During his working years, the mechanical engineer devoted his weekends to building and racing cars. This passion fueled Bill into his 70’s—he even won a regional race at the age of 76! 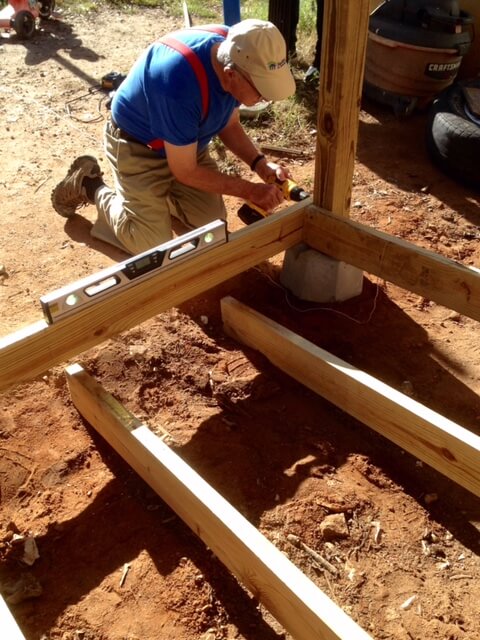 Three years ago, Bill began using his spare time ­ time opened up by retirement and less travel for racing ­ to join Rebuild Upstate on a few repair projects. Since then, he’s been a devoted volunteer, contributing oversight to countless repair projects.

When asked how volunteering after retirement has impacted him, Bill simply replied, “Satisfaction.” He went onto describe an experience that has imprinted itself onto his memory:

Bill and a team of students built a ramp for a stroke victim who was having difficulty recovering his ability to speak. After the ramp was finished, the homeowner was brought out by his wife in a wheelchair. Upon seeing the finished work, the homeowner said, “That’s beautiful.”

Bill has done some extensive work on our repair projects — he worked for 2 months and over 60 hours on one house, helping ensure the electrical work met city codes and making it possible for the homeowner to move back into her house. Whether it is building ramps or updating the electrical system of an entire home, Bill can do almost anything—but he doesn’t do it alone.

“On a recent project I taught three volunteers how to use a mitre saw. I try to pass on skills to at least a few other volunteers during every project I’m on,” said Bill.

Bill is an excellent example to all of us at Rebuild Upstate of not taking the word “retirement” at face value. Like him, we find the satisfaction gained from our work ­ helping homeowners rediscover what it’s like to feel safe and secure in their own homes ­ to be a reward unlike anything we get from the usual leisurely activities.

To lend your construction skills on a project—or to learn a few things from Bill—contact us about volunteering today.

Return to top of page